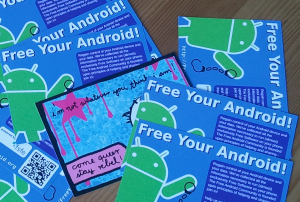 „Not sure, if I’ll leave it that way.“ This was my first summary, after having thrown the Google account and Google apps from my phone in March. I did, and yesterday, for the first time, I helped to give an ‚Android Liberation Workshop‘ together with some FSFE activists. (Read more about their campaign here: https://fsfe.org/campaigns/android/android.html)

The workshop had two goals: To help people install free software on their phones and to develop/document some guidelines that trainers for such workshops could use. Our workshop check list is here: https://wiki.fsfe.org/Android/Workshop. Personally, in the first go, I was more interested in helping someone unlock her phone. ‚Meta talk‘, later – hands on, first.

Altogether, there were twelve to fifteen people attending the meeting and four or five freed their phones. This meant: They installed CyanogenMod, an Android distribution developed by a community, and the F-Droid app instead of Google Play. Fdroid offers a choice of free software that can be installed as comfortably as from Google Play.

My experiences, thoughts and ideas in a few words:

Summary: I’d like to do it again! As it is a lengthy process to flash phone by phone, it would be so much cooler to have the phone manufacturers deliver their devices with free software only, e.g. CyanogenMod, that is to cooperate with the community from the beginning.