Last weekend was my first weekend at FOSDEM! I’m really glad I finally made it there! Apart from a little Friendica developers‘ meeting, I learned how to add a new setting to Friendica, I heard interesting talks and I met old acquaintances as well as new cool people.

And I finally laid my hands on an Ubuntu phone after the talk. I was curious to see it in real life for a very long time. So basically, what I did when I got back was to borrow a partly broken Nexus 4 device to take a closer look. Here are some observations and thoughts of mine: 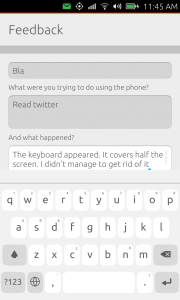 What is missing for my smartphone use cases: Almost everything…

It’s a very cool toy and I want to learn more about it. It’s not for my daily use (yet). Though the developer at FOSDEM said it’s his „production“ phone. What is interesting for me: Looking at this device, I see things that happened to Ubuntu Desktop in a different light. I had been wondering about web apps, all the display server discussion, the Unity desktop (which I don’t use). Some of this makes more sense if they manage to „streamline“ desktop and phone or tablet.